Value Premium Dead or Poised for a Comeback in 2016 Investments?

Value Premium Dead or Poised for a Comeback in 2016 Investments?

It has been thoroughly documented in research (Fama and French) that there is a value premium where in the long run value stocks have better risk adjusted performance than growth stocks.

For the 10 years ending in October 31, 2015, the Russell 1000 Growth Index outperformed the Russell 1000 Value index by 2.35% annualized.  That is a significant difference, especially since history and research has told us that we should expect value to outperform most decades. (source: Pimco)

What has made this past decade favor Growth?

Pimco argues there are two reasons and those reason are grounded in low rates. (Chart Source: Pimco)

After the financial crisis, future expectations for the economy were weak. Further, we have seen muted growth in the economy the past 10 years, especially compared to the growth in the stock market from 2009-2015.

Value stocks tend to be stocks whose value is tied to their current earnings and thus their returns tend to be more cyclical and tied to the growth and performance of the global economy.  Growth stocks are less dependent and grounded by expectations of the overall economy.  The price of a growth stock is more dependent on earnings much further into the future than value stocks that are priced more by their current or shorter term earnings.

For example, no one expects Coca Cola to sell many more cans of Coke in the next 5 years than they did the past 5 years because their distribution and product is very mature.  Conversely, many would expect Netflix to grow quickly as more people become interested in consuming media via streaming video.

Pimco also argues that stocks value is the discounted future cash flow (earnings) of the company.  As the amount we discount the earnings drops, the value of the future cash flows increase.  Since growth stocks have a higher percentage of the earnings occurring in the future vs Value stocks, the prices of growth stocks have gone up more than value stocks. 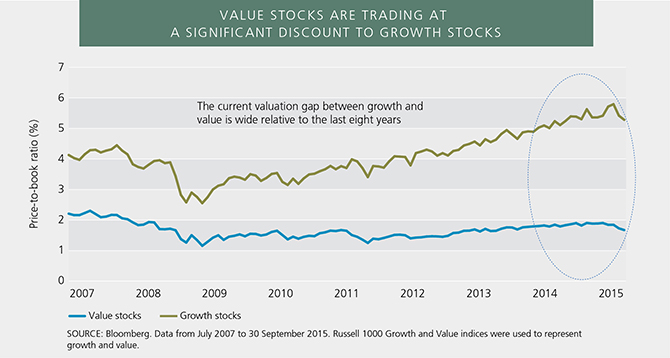 With Growth outperforming value, it appears on a price to book ratio, the gap in value between growth and value stocks going forward appears to favor value according to Pimco.

Pimco further argues that a relatively few large growth companies have propelled growth stocks higher and the performance of a few stocks (called a narrow market) tends to be unsustainable over time.  Therefore they see a strengthening economy, rising, rates, a valuation discount, and a narrow market led by few large growth stocks all pointing towards the potential return for the value premium.

My Question – Are things truly different this time or are we merely seeing a moment in time that value underperforms.

Generally speaking, there is regression to the mean (tendency for trends to reverse) in outperformance.  The question facing us today is that it has been academically shown that value stocks have better historical risk adjusted returns vs growth stocks and our question is “will value prove to be better going forward?  Or are we facing a new situation when the value premium is gone forever?”

I tend to fall into the camp that most times in the financial world someone tries to tell me that this time is different, its more likely to be the same.  In my  opinion, Growth has had its time in the sun and at some point value will outperform.

Due to the academically proven risk adjusted returns of value stocks we have overweighted value in our portfolios and recent history has hurt our returns.  However, going forward, I feel the value “tilt” will help drive the performance of our portolio.  As always, past results do not guarantee future returns.

Much of the analysis in this report was from this great article on Pimco:

** The information on this website is intended only for informational purposes. Investors should not act upon any of the information here without performing their own due diligence. Reh Wealth Advisor clients should discuss with their advisor if any action is appropriate.